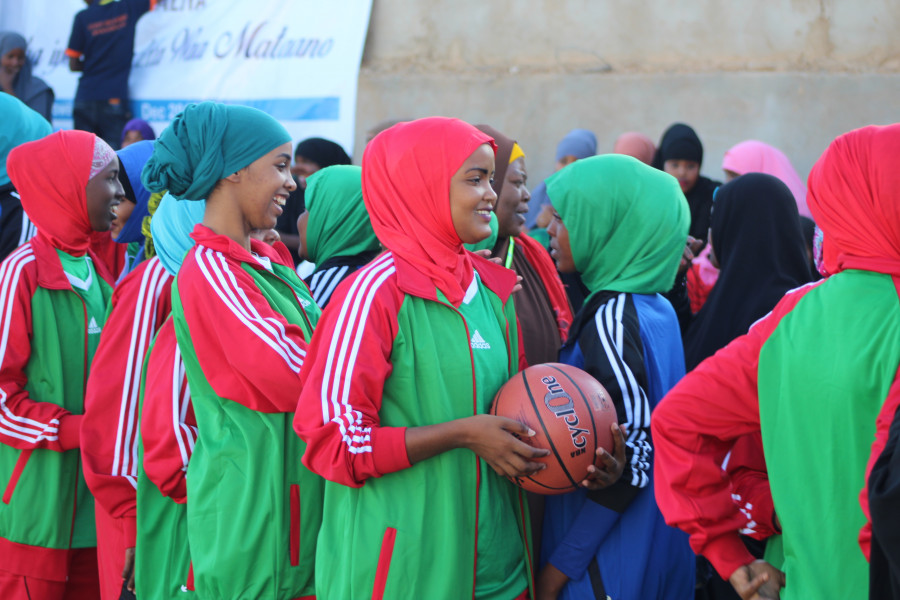 From ancient Olympic games to ping pong diplomacy between the US and China in the 1970s, sports have long been recognized as method to build respect and peace across communities and nations.

With expertise ranging from hosting soccer tournaments that bring together disparate Bol Island youth in Chad, bridging community divides in Sudan, and supporting the first national women’s basketball tournament in two decades in Somalia, DT Global views sports as an important tool for effective peacebuilding. In celebration of the International Day of Sport for Development and Peace, we’re sharing a some examples of the transformative power of an open field and dedicated players.

In some cases, using sports for peace can be as simple as providing a shared space for groups. In countries where conflict has damaged even the infrastructure needed for communities to join together, construction or rehabilitation of these spaces can send a powerful message and provide a venue for diverse populations to unite. In Sudan’s Blue Nile State, through USAID’s Toward Enduring Peace in Sudan (TEPS) project, DT Global implemented the construction of green yards for girls and boys to play sports. We followed this with training on democratic processes and consensus building and sports tournaments—laying the foundation for inclusive interactions between youth groups. 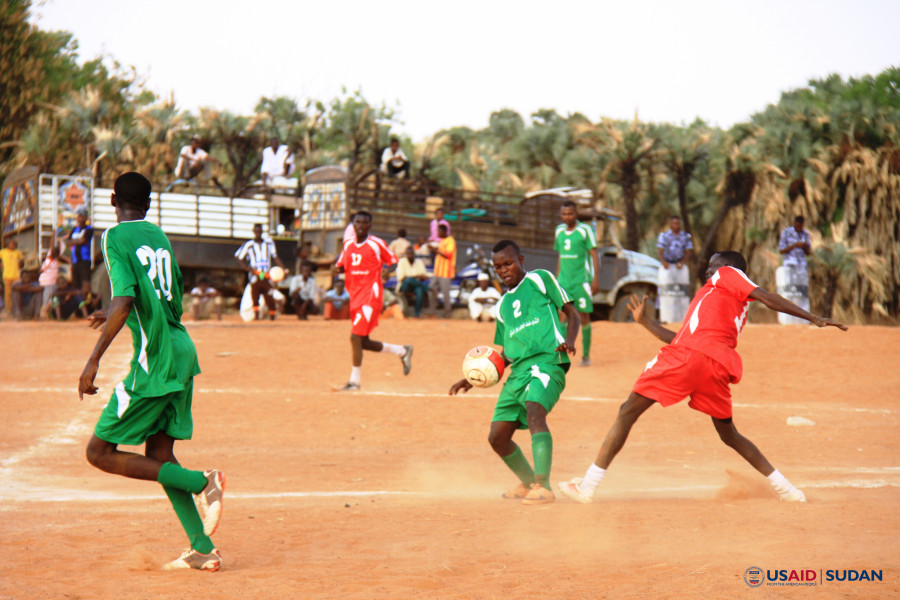 Of course, sport in and of itself is not a cure all. To combat potential community or ethnic tension, DT Global finds that it’s important to work closely with key community stakeholders to understand all the dynamics at play. We also often incorporate training or discussion around conflict mitigation, respect, and communication into the sporting events that we host.

When done effectively, sports can be a great way to bridge divides among clans, ethnicities, political groups, and other diverse populations. In West Kordofan, Sudan, USAID TEPS worked through existing local sports clubs to organize and outfit football tournaments for 26 teams from eight localities. These games brought together teams from two clans—Awlad Omran and Zeud—who had suffered from the deadliest conflict in the state over the prior two years. After the tournaments concluded, the participants committed themselves to becoming peace ambassadors and have subsequently spearheaded a reduction in incidents between the two tribes.

Sports have a near universal quality—no matter what language you speak, or where you are from, you probably know or can learn the rules of the game. According to FIFA, for instance, more than 200 countries play soccer—one of the world’s most popular sports. This shared quality can tangibly demonstrate commonalities rather than differences among players and spectators.

In Chad, youth in the Bol Island Province are often culturally and physically separate—by virtue of the many islands they live on—which leads to mistrust and negative perceptions of the other that are exacerbated by Boko Haram’s attacks. To meet these challenges, USAID/OTI’s Community Cohesion Support Program in Chad, implemented by DT Global, worked with the Lac Region Football League to organize a tournament for youth from three islands and the town of Bol. 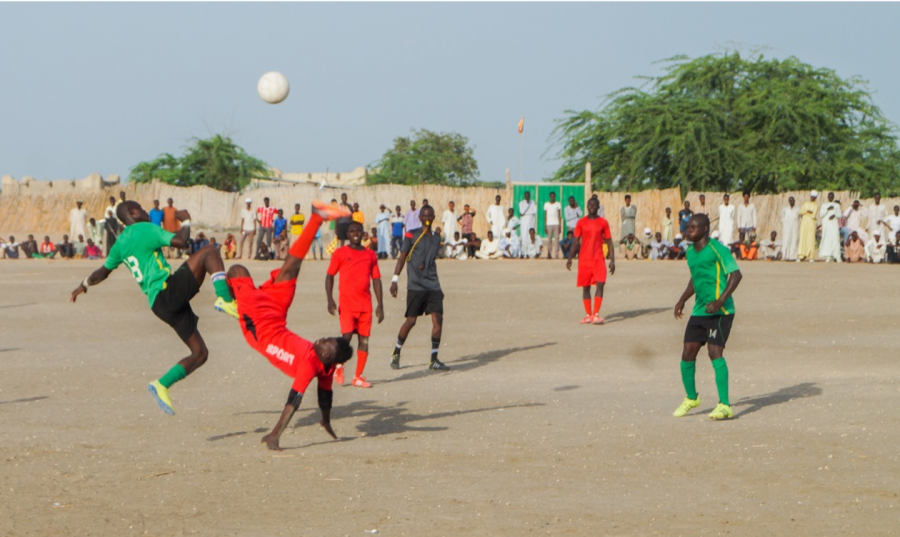 We asked that each team was made up of players representing varying ethnicities of the region and islands to promote cross-cultural dialogue, provided training and discussion around peace and social cohesion, and culminated our work in a tournament with over 3,000 spectators at the final match, spurring longer-term relationship building between players across communities. As one player stated, “In 2015, the extremist groups' attacks split many of us and a climate of mistrust and fear reigned between us. This tournament has been one of the best opportunities to reconnect with our relationships and interactions.”

While women and girls still face discrimination on and off the court, we’ve found sports can be a powerful way to break down stereotypes and provide leadership and peacebuilding opportunities for women and girls. Nowhere have we seen more success than in USAID’s Transition Initiatives for Stabilization + (TIS+) project in Somalia.

Before 2006 in Somalia, women’s basketball—through hard won battles for equality during the 1970s and 1980s—was a leader in sports across the country. The women’s team competed on national and international levels, until the civil war and advent of Al-Shabab destroyed sports infrastructure and made playing basketball a punishable offense. Said Suad Galoow, a former star of the Somalia national basketball team, “Before the civil war, we used to play basketball without any fear. People used to come to watch us and treat us as celebrities. After the country went into ruins, so too did women’s most popular sport, basketball.” 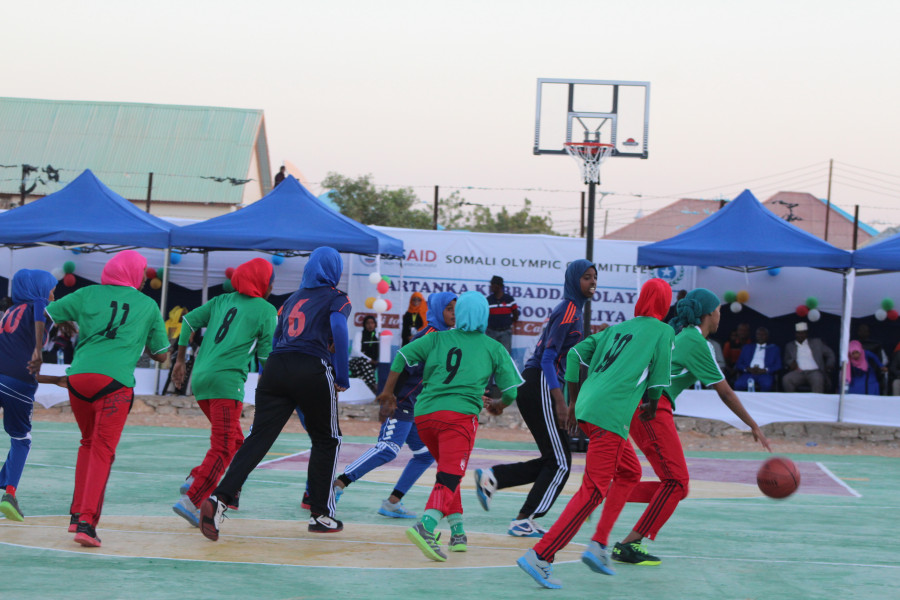 As part of TIS+, DT Global worked with the Somalia Olympic Committee and National Basketball Federation to provide training for women across all seven regions of the country. Women who participated were selected to represent their region at the first national women’s tournament in more than 20 years. The tournament, held on a basketball court rehabilitated by TIS+, included seven diaspora basketball players who joined the regional teams in a show of national unity. The games attracted 2,500 spectators in person, was viewed on live TV throughout the country, and engaged approximately four million people through social media.

The momentum has continued. After the tournament, the Somali National Basketball Federation selected 20 women to form a national women’s team, including a returnee from the Dadaab refugee camp. This team has gone on to compete at the Emirates Games in Sharjah, UAE, the 4th Arab Women Sports Tournament in Dubai, and others—demonstrating the determination of Somali women and girls to be equal participants in society, and the unifying power of sports for women, men, girls, and boys in the face of extremism and community discord. Said Nada Mukhtar, one of the baseball players, “We are all working towards the same goal, showing respect for each other and sharing space and equipment. Sports is bringing about unity which politics has failed to do over the years.”