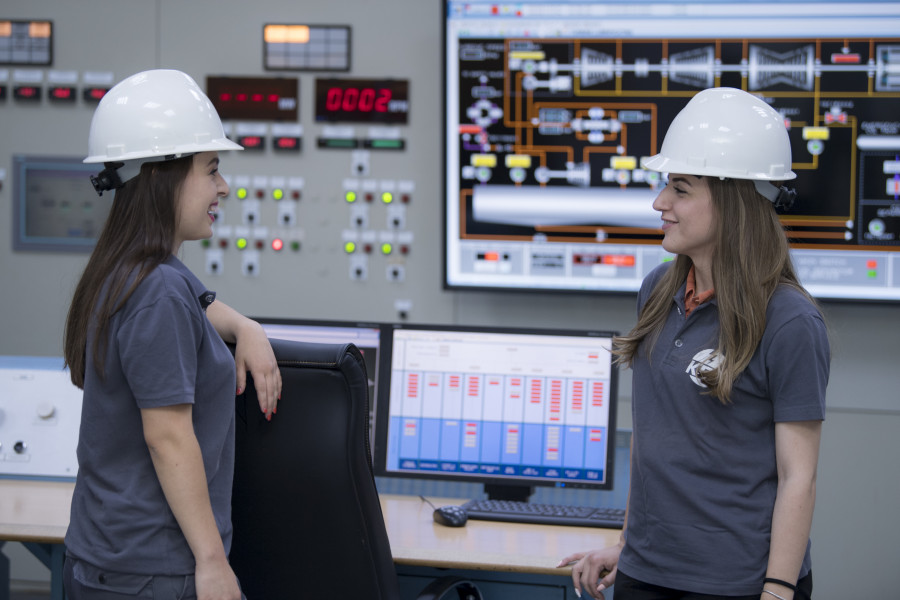 In a bright modern room on a Friday afternoon, a group of 12 Kosovar women have gathered for a training on financial management for NGOs. On the wall is a quote “Some people dream of success, others make it happen.” This is a group that is making it happen. The women are part of the Association of Women in the Energy Sector of Kosovo—or AWESK, the first and only organization dedicated to supporting gender equality in Kosovo’s energy sector—and they’ve come here to learn how to grow AWESK into a sustainable organization.

The workshop participants make up a diverse group: engineers, architects, and economists—many of whom work in Kosovo’s energy sector institutions—as well as students and teachers. The training session is one in a multi-part module on organizational capacity development, supported by USAID’s Kosovo Energy Security of Supply (KESS) project, implemented by DT Global. It’s part of a three-pronged Job Order to build AWESK’s organizational, communications, and networking capabilities.

On a mission to support women and girls in the energy and Science, Technology, Engineering, and Math (STEM) fields

Formed in 2017 with support from DT Global’s prior USAID REPOWER-Kosovo project, AWESK was created to help solve the challenges women in Kosovo face when they enter the energy field. Kosovar women are a well-educated group, but once they leave the university setting, they are stymied by gender discrimination. Almost nowhere is this more prominent than in the Kosovo energy sector—a largely male-dominated sector which women struggle to gain entrance to. Despite the Law on Gender Equality, which calls for up to 50% inclusion of women in all sectors and at all levels, only 10% of the energy sector workforce is composed of women, and within this, their positions are often administrative.

AWESK was created to help solve these challenges, both for women in the energy sector and STEM fields in general. AWESK advances gender equality within Kosovo’s energy sector through, mentoring, networking, and professional development opportunities. The Association is also designed to help women enter into energy sector institutions, such as Kosovo Energy Corporation (KEK), the Energy Regulatory Office (ERO), Kosovo Electricity Transmission System and Market Operator (KOSTT), and the Ministry of Economic Development (MED) as well as into the private energy industry. 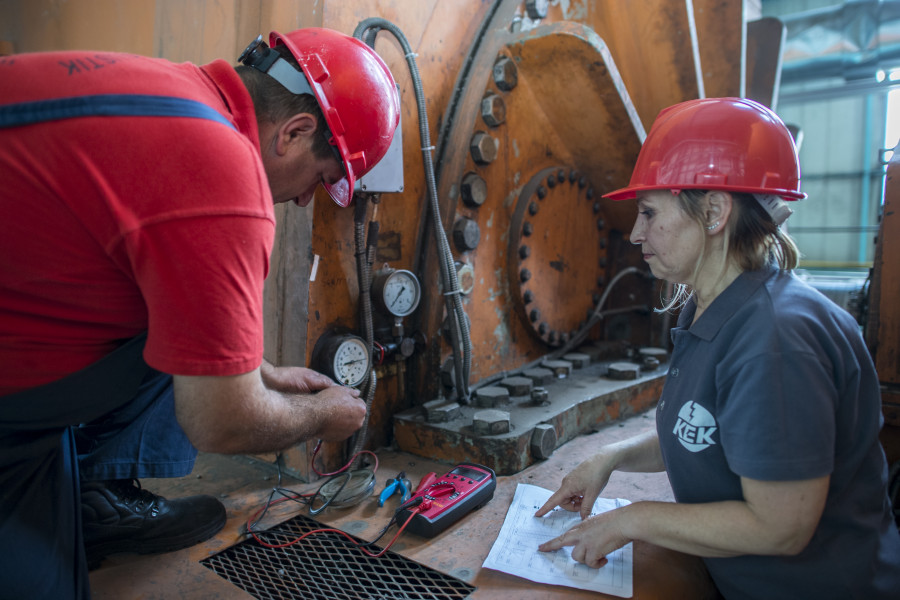 From a mentorship and networking group to fully formed NGO

DT Global has had a long-standing commitment to women in the Kosovo energy sector, starting with our gender integration work through USAID REPOWER-Kosovo, implemented from 2014 to 2019. The USAID REPOWER-Kosovo project began its gender equality work with the launch of the mCircle initiative in 2016—a mentoring network for women in the energy sector discuss the challenges they face, concrete action steps to approach these challenges, and ways to create opportunities for women in the energy industry. The mCircle initiative held a series of workshops for its members, with trainings and discussions, on a range of topics—leadership qualities and opportunities for women, professional advancement information, career planning and goal setting, and how to attract women and girls into the STEM field.

At the beginning of 2017, leaders in the mCircle initiative decided to create a national association for women in the Kosovo energy sector and requested support from USAID REPOWER-Kosovo. By June of that year, AWESK was born. Through the end of REPOWER-Kosovo, the project supported AWESK to create a strategic plan, complete official registration, develop a board, and create rules and procedures based on international best practices in non-profit management.

Like many nascent NGOs, AWESK faced challenges in developing its organizational capacity, including strategic planning, financial management, fundraising and proposal development, networking within the energy sector at national and international levels, and communications strategy and implementation. AWESK’s membership was composed of engineers who are mainly employed in Kosovo’s public sector energy institutions and did not have experience in NGO management.

After the end USAID REPOWER-Kosovo, AWESK looked to DT Global’s USAID KESS project for further support, including using some of the project’s office space. In discussions with KESS during this time, AWESK made clear their need for further support to become a more sustainable NGO, and by January 2020, USAID KESS began supporting AWESK to develop its organizational capacity.

Says Vjollca Caka, USAID KESS’s Communications and M&E Specialist, “Despite having been established for two years, the organization was facing organizational and fundraising challenges as is common for new NGOs, as well as difficulties pursuing communications goals. Limited resources also hindered their ability to develop networking channels with other women associations/entities at the national, regional and international level so that they could build on their shared experiences and partnerships.” 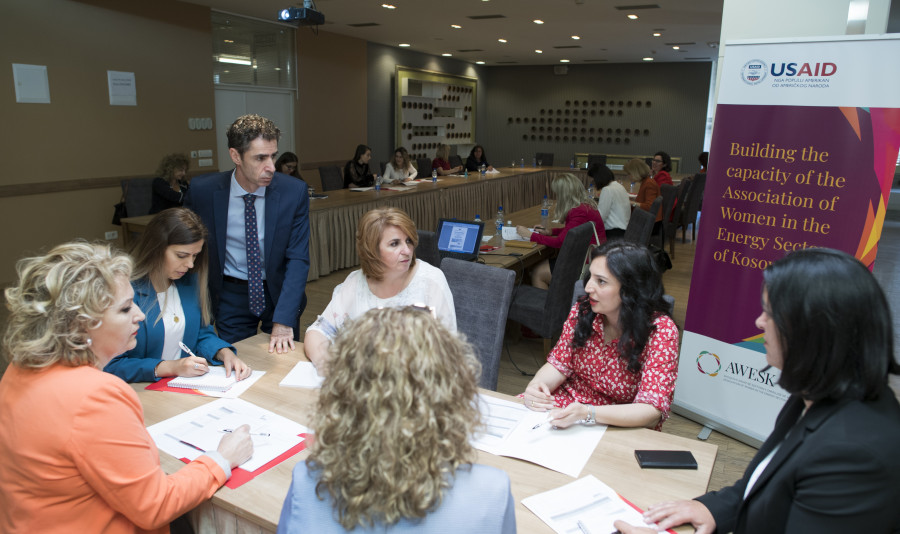 To date, DT Global’s work with AWESK has paid off. “Today, after very intensive work and lots of collaboration, engagement, learning, and adapting during the implementation phase, between AWESK, USAID KESS staff and professional experts, I am very happy to see fantastic results achieved […] and moreover see women engineers transforming into a more confident personalities who feel ready to pursue their goals and mission towards integrating women and girls in the energy sector” says Ms. Caka.

To support organizational capacity development, Kosovo KESS has been working with a local training group—Advocacy, Training, and Resource Center (ARTC)—and local technical energy experts to hold 15 different trainings to date on a range of subjects determined to be high priority with AWESK. These include Strategic Planning, NGO Management, Financial Sustainability, Project/Grant Proposal Design, Project Management Cycle, NGO Legal Reporting, Gender and Energy, Energy Tariffs, Energy Efficiency, and Renewable Energy. Each training has involved between 15-25 AWESK members and collectively, they have enabled AWESK to better plan and prepare for stronger organizational health and operations.

To support communications development, in collaboration with our Kosovo KESS team, AWESK is developing a working communications strategy and created and launched a suite of communications products. These include a logo and visual branding guidelines for all products based on AWESK’s mission to advance powerful women in the energy sector, a fully developed website (awesk.org), branded social media channels along with training and support to maintain these channels, and a fact sheet. Currently, our project is working with AWESK to design and develop a brochure, three posters on specific topics related to AWESK, and videos.

Finally, to support networking, AWESK has formed four MOUs with organizations and universities in Kosovo. Two, with ATRC and the Kosovo Women’s Chamber of Commerce (G7), are designed to enhance cooperation with both ATRC and G7 to increase joint activities and overall business support. Two additional MOUS, with the University of Prishtina “Hasan Prishtina” and the Network of Women Organizations from Roma, Ashkali and Egyptian communities (RROGRAEK), support better outreach of women and young girls from marginalized communities in their career orientation and opportunities for better energy savings and use of renewables in their households and business.

“AWESK went from an idea to an Association representing more than 140 committed members who are working for inclusion and empowerment of women in the energy sector. In few years, we aim for gender to be part of policies and strategy documents, while AWESK plays an important role in all energy related programs. With our work we aim to help guide more women in the sector because being more inclusive towards women is not a matter of choice, but business imperative in today's world.”