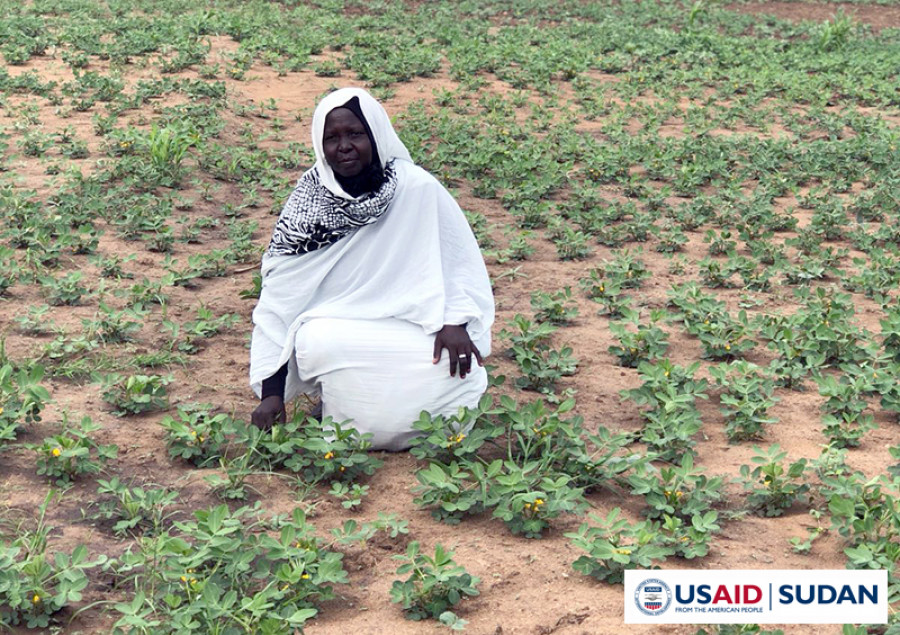 In fragile conflict environments like South Kordofan State (SKS) in Sudan, empowerment of vulnerable groups is critical for community development and peacebuilding. Building on these key Stabilization and Transition activities are the sustainable livelihood opportunities that encourage cooperation between diverse groups, enhance social cohesion, and ultimately minimize threats to the peacebuilding process.

Despite their intrinsic value to socio-economic life in SKS’ rural areas, women face a system of inequality and inaccessibility to valuable means of production and capital that reinforces their marginalization denies their decision-making ability and cripples their potential for economic advancement and financial stability. As a result, women like 42-year-old Mastora Babo from Dameek, SKS struggle to survive.

In April 2018, Mastora joined DT Global's USAID-funded Toward Enduring Peace in Sudan (TEPS) project as a trainee and fund recipient under the “Agro-Business Development and Capacity Building” micro-finance activity. The training package included farming skills, seeds distribution (okra, watermelon, sweet potatoes, and radish), and the establishment of two solar-powered community farms in Dameek and Barno, two tightly-knit SKS communities in close proximity to each other. Following the training on June 2018, 60 women, including Mastora, were chosen to each receive a subsidy of 2,000 SDG (Sudanese Pounds) to assist them in working on various income-generating activities, most of which was farming. The women were selected based on criteria that included vulnerability, displacement status, type of household, and field experience. The women would subsequently reimburse the subsidies—typically within 6 to 12 months—to form a revolving fund for the community.

As one of the grantees of the reimbursable subsidies, Mastora was able to expand the farm on her family’s land from one feddan (450 square meters) of groundnuts to 2.5 feddans. This cultivation increased her production from 3-4 sacks to 13 sacks of groundnuts, resulting in profits that exceeded her expectations. She sold the groundnuts for 1,000 SDG per sack, and with her returns, she not only quickly reimbursed the funds but was also able to pay for her son’s school tuition. Mastora decided to take it a step further and help inspire and encourage other women in the local villages to follow in her footsteps and create better lives for themselves. She also took on the responsibility of following up with fund recipients to collect back the funds used for farming and start-ups.

From June 2018 to April 2019, Mastora helped over 60 women in her local communities of Dameek and Barno take part in this project. She teaches micro-finance recipients the importance of returning the money so that other women can make use of it as a revolving fund. Her leadership clearly had a strong impact on the beneficiaries, as the success rate for the revolving fund has been exceptionally high—currently at a 98% return rate. “I can confirm that we managed to collect back almost all of the money in just four months and it will be recycled to micro-finance another 60 active women," she reported.

The revolving fund also supports the 200 women responsible for running two solar-powered community farms. The farms are divided into three to four feddans (1,500 to 2,225 square meters) amongst the women, who take turns cultivating fast-growing vegetables (from planting to harvest in one to three months) and selling the produce grown during this period. The women also allocate some plots to grow fruits and vegetables with longer maturity periods, such as bananas and potatoes and divide the income equally among those who contributed to the caretaking of these plots. Power on these farms is generated by a solar pumping well system, provided by TEPS, that uses photovoltaic (solar) batteries; once used, the batteries are properly disposed of to prevent soil degradation and water contamination. Complemented with the training of the community members and local ownership, this technology is environmentally sustainable and resistant to the unreliable rainfall caused by climate change.

In order to further secure their livelihoods, the women in the program successfully fought to secure legal ownership of the community farms. The farmland was originally owned by the local government’s native leaders, who would have had the power to seize the land from the women at any time. However, following the women’s efforts, each farm is now officially registered with authorities under the Dameek and Barno Women’s Productive Association, respectively. As a local community member shared, “We had to stand up and talk and convince our local native leaders, who are all men, to allocate lands for us.” Their resounded success displays their leadership and newly acquired skills in advocating for themselves and bodes well for a brighter future for women in this community.

In March 2019, Mastora shared with us her future plans for expansion for the next farming season, and remarked, “I am happy that I am able to support my son and I have made some local contacts using my income to get more farming lands for the next rainy season. I would like to send my thanks to USAID and TEPS.”