The Civil Society in Syria Program (CSSP) was implemented by DT Global from January 2016 through February 2020, with funding from the US State Department’s Bureau of Near Eastern Affairs, Office of Assistance Coordination (NEA/AC). This four-year program, implemented in both Northeast and Northwest Syria, increased the ability of civil society organizations, advocacy organizations, and individuals to serve, represent, and advocate for Syrians while holding local and nascent governance structures accountable to the communities they served.

This four-year period was a time of unprecedented volatility and unyielding tumult in the long history of Syria’s civil war. As a result, CSSP navigated four major shifts to program strategy and objectives due to changing realities on the ground and programming priorities.

On the ground, program shifts were dictated by several major political and security changes in Syria. This included the swift and brutal rise of the Islamic State of Iraq and Syria (ISIS), particularly in the Deir Ezzor and Raqqa governorates in 2016; the Assad regime’s overwhelming measures to retake Aleppo in late 2016 and Rif Damascus in early 2017; the Turkish Government’s implementation of Operation Olive Branch in early 2018; the subsequent rise of Hayyat Tahrir al Sham (HTS) in Aleppo and Idlib governorates following ISIS’ departure; and the US-led liberation of Raqqa and Deir Ezzor from ISIS in 2018.

These security and political realities were coupled with shifts in the program focus due to changes in the US government’s Syrian aid strategy. Initially, CSSP focused on supporting nascent local civil society organizations in preparation for what was assumed to be the imminent fall of the regime. But with the rise of ISIS and HTS, by January 2017 the program refocused its work to help civil society actors support their communities resist radicalization attempts by ISIS and HTS. Following the liberation of Raqqa from ISIS and HTS’s subsequent rise in much of Northwest Syria, CSSP adjusted programming to support essential service delivery through civil society and governance actors, primarily in rural areas of Raqqa and Deir Ezzor. The program ended in 2020 with a renewed international focus on UN 2254 negotiations to continue progress toward an international and politically negotiated end to the war.

Throughout this time, CSSP worked with 50 civil society and local advocacy partners across Northwest and Northeast Syria to provide grant funding for activities that resulted in improved communication mechanisms between local governance bodies and their constituents; increased citizen understanding of civic rights and responsibilities; and improved transparency and inclusion of women, youth, and other minority populations in political processes. Results also included enhanced sustainability mechanisms for local governance entities to continue the provision of essential services such as drinking water, irrigation, electricity; and improved civil society and government capacity to more effectively understand and respond to the needs of local constituents.

Here are five key program successes achieved through a commitment to flexibility, adaptive remote management, and transparent communication between NEA/AC, DT Global, and our local partners:

1. Supporting to at-risk youth and other marginalized groups to counter violent and extremist ideologies.

The Syrian civil war has resulted in an entire generation of Syrian youth who have grown up surrounded by violent conflict. In early 2017, witnessing a rise of HTS influence particularly in Northwest Syria, CSSP organized a coalition of local civil society actors across Northwest Syria committed to assessing and countering HTS’ recruitment strategies most prevalent at the community level. To do this, CSSP developed the Syrian Youth Initiative Program with six Syrian CSOs already operating and trusted in Northwest Syria.

This coalition of CSOs collaborated to design and implement strategically integrated projects that gave youth the skills to advocate for positive change in their communities and in Syrian society, enhance their participation in decision-making, and counter the rise of violent extremism within their own communities. To do this, CSSP trained the coalition to conduct surveys in their communities and determine the greatest factors for radicalization among youth. Based on the results of the respective surveys, the CSOs implemented projects to target the root causes of radicalization at the community level. Projects ranged from rehabilitating a soccer stadium and library for greater access to extra-curricular activities to offering classes in photography and painting with a psycho-social component imbedded into these classes. Four of the six CSOs established Youth Citizen Clubs throughout Northwestern Syria to raise local issues identified by youth as needs in their communities. Throughout all activities, a CSSP partner led training sessions for other network members to integrate gender sensitivity into program design. 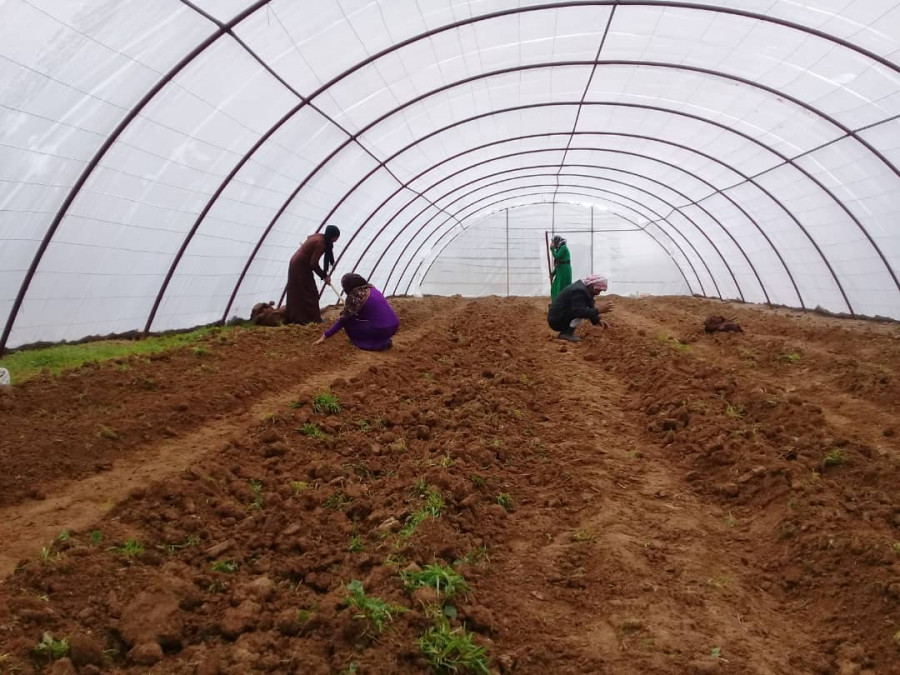 Once a Middle Eastern export hub for industrial production and agriculture with previously robust value chains, Syria’s civil war has destroyed production facilities, hampered trade and travel, and resulted in a lack of market access with rising inflation. To mitigate this, CSSP provided grants to support vocational training and livelihoods. For instance, in one activity in 2018, CSSP supported a livelihoods center in Tabqa to conduct a local needs and market assessment to determine localized needs and foster business ideas from potential entrepreneurs. Based on assessment results, vocational training and extracurricular information sessions were provided for 120 community members on plumbing and electricity installation, plant nurseries, and Raqqawi traditional clothes embroidery, linking students to job opportunities where possible.

Following information sessions, CSSP support provided entrepreneurs from the community with the necessary funds to start small businesses. Small business support recipients were able, with a small cash infusion and business literacy and marketing training, to establish stable, profitable, and sustainable businesses to improve the communities’ labor market while helping recipients to support their families. CSSP also supported a business incubation center in Raqqa. This support focused on helping women and youth with strong entrepreneurial skills who needed access to capital. It resulted in the successful establishment of green houses, chicken production facilities, hair salons, cheese production, and other scalable value-added industries.

The US-led operation to liberate Raqqa from ISIS in 2017 resulted in unprecedented damage to essential services in Raqqa city and the surrounding peri-urban and rural areas. In coordination with local community representatives, local officials, and CSOs in Raqqa, CSSP assessed the condition of the irrigation regulators, agricultural complexes, and water pumping stations and worked with local partners to rehabilitate them. Impactful results included rehabilitation of five regulators now irrigating 22,730 acres of land for 34,000 families; rehabilitation of 24 agricultural complexes improving 78,573 acres of land for 518,500 families; drinking water provided to 15,000 families through 6.4km of rehabilitated supply networks; and 15 water pumping stations repaired and now providing irrigation to 42,945 acres of land for 307,840 families. As one farmer said, “Without the regulators, the water level would not rise to reach the gates leading to my land. I am going to buy fertilizers as it is now possible for me to farm and irrigate my land thanks to rehabilitation of the regulators.” 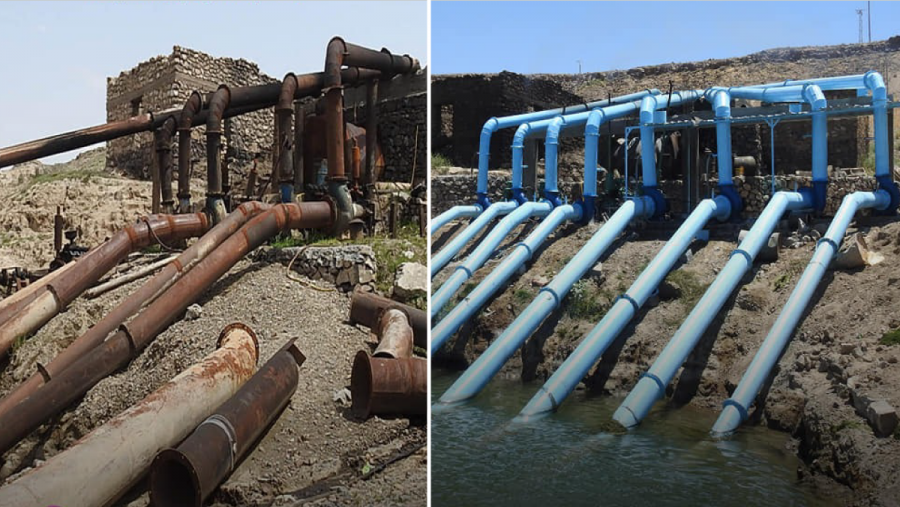 4. Capacity building for use of media by civil society organizations

Positive community perception of local civil society and governance efforts was a key component of ensuring long-term stabilization in Northeast Syria. In addition, building a mindset within the community that recognizes and appreciates progress made since liberation from ISIS is an important building block for local resiliency against violent and extremist ideologies. CSSP addressed this need for clear and direct strategic communications by working with a grantee that specializes in media training focused on communication management and strategic messaging for both local communities and international stakeholders.

Based on prior trainings the grantee had conducted for CSOs in Raqqa, CSSP replicated this training to provide media capacity training for nine more CSOs. As a result, all nine CSOs developed media strategies focused on increasing messaging impact. To gauge impact, in the summer of 2019 DT Global conducted public opinion surveys of 200 respondents across Raqqa and Deir Ezzor governorates in which 45% of respondents in Raqqa and 22% in Deir Ezzor stated they believed local civil society organizations were most effective at providing essential services within their community. This was higher than levels of confidence expressed for any other group or entity in these communities. This however also illuminated a substantial trust disparity between CSOs and governance entities. To address this, CSSP increased community awareness through additional community messaging to highlight essential services that had been transferred to governance structures including local councils and agriculture committees, to highlight the sustainability good governance provides to service delivery.

The Syrian civil war is now in its 9th year with no sign of an immediate end. While the regime has reclaimed the majority of its former territory, US and partner forces remain in Northeast Syria in support of a politically negotiated settlement for a democratically led transition to a new Syrian government. In late 2019 and early 2020, as the Syrian Constitutional Committee, representing government, opposition, and civil society groups, prepared for the next round of UN Security Council 2254 negotiations, CSSP worked to ensure citizen voices were heard in the ensuing discussions. With CSSP support, six grantees implemented workshops and citizen awareness raising sessions across Syria and internationally about the Constitutional Committee and Resolution 2254.The grantees, led by CSSP, were able to integrate Syrian community voices into a political process that had left them behind, enabling them to voice feedback and grievances to those in power.

Looking back at CSSP

DT Global is proud of our longstanding support for Syrian civil society organizations, activists, and nascent local governance institutions as the country undergoes immense challenges and changes. Through persistent capacity building of local CSOs, we were able to leave behind a network of organizations with the systems, tools, and talent to continue building resiliency against extremism and with an eye toward a more inclusive, representative, and democratic Syrian society.