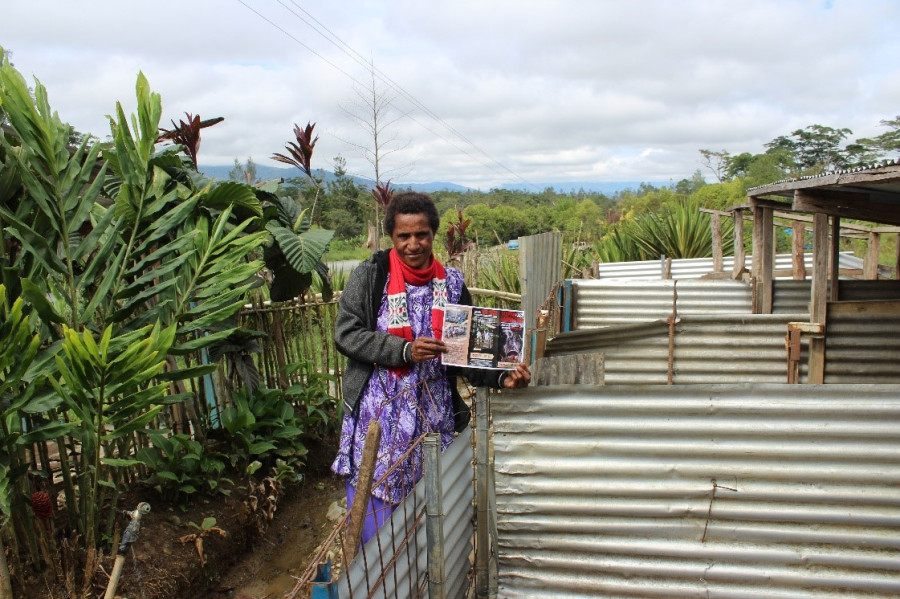 While battling the COVID-19 Pandemic, a new animal killing disease also emerged in Papua New Guinea: African Swine Fever. Like other pig farmers in the Upper Highlands, Grace Mark, who lives in the Jiwaka Province, was at risk of losing her livelihood.

A single mother with two children, Grace is a subsistence farmer of coffee and a semi-commercial pig farmer, relying on the income from the sale of her pigs for school fees and other cultural obligations.

In most Papua New Guinea communities, it is the men who own the pigs, build the fences, and provide fuel to cook food for the animals. But it is the women who care for the pigs every day. Pigs are a central part of Papua New Guinea's culture and are regularly traded to seal marriages or end disputes. There are serious concerns that mass pig deaths could cause social and economic upheaval in the country.

Grace lost six of her nine pigs to the deadly African Swine Fever disease, which kills almost all infected domestic and wild pigs but does not affect humans. Relatives and neighbours from her village and the neighbouring community also lost several pigs to the disease around October 2020.

Initially, Grace thought that her pigs were dying due to sanguma, or black magic, but then heard about a pig-killing disease in the area.

“I thought it was sanguma but then I recalled hearing about a pig illness: African Swine Fever. So, I called the National Agriculture Quarantine and Inspection Authority, and they came, checked, and confirmed that it was not sanguma but an illness that kills pigs,” Grace said.

Belief in sanguma is widespread in Papua New Guinea's highlands region. If something unwanted occurs in a village, people, most commonly women, are often accused of committing black magic, or of being a witch. They are then cast out of their homes and attacked or killed.

Disruptions to ‘land, women and pigs’ are commonly understood as the three causes of tribal conflict in the Highlands Region. Unchecked African Swine Fever wipes out pigs and family livelihoods. But also has the potential to incite violence when communities believe that black magic causes pig deaths. Raising awareness about the true cause of these deaths—a virus—is key to stopping the virus and quelling violence.

So when African Swine Fever killed close to 400 pigs in Mendi in the Southern Highlands Province in March 2020, this prompted an immediate response from Papua New Guinea’s National Agriculture and Quarantine Inspection Authority. This work is supported by the Australia and New Zealand funded-Pacific Horticultural and Agricultural Market Access (PHAMA) Plus Program, implemented by DT Global. PHAMA Plus works to improve economic growth, export processes, and rural livelihoods in Pacific Island Countries with a special emphasis on women’s economic empowerment. As part of this work, PHAMA Plus works closely with Pacific Island governments on biosecurity issues such as African Swine Fever.

The National Agriculture and Quarantine Inspection Authority provides scientific quarantine and inspection services to support agricultural production in the country by minimising biosecurity risks around exotic animal and plant pests and diseases. Biosecurity—the procedures designed to protect humans and animals from invasive species—is an essential component of protecting food security and trade, and of growing a sustainable and stable economic future for the region.

PHAMA Plus works to limit the virus spread

A key part of PHAMA Plus’s work was to raise awareness that African Swine Fever was caused by a virus and not sanguma. The current proactive mass information campaign has been sustained to manage sorcery related or gender-based violence.

National Agriculture Quarantine and Inspection Authority’s biosecurity team, supported by PHAMA Plus, worked closely with communities and pig farmers like Grace to help raise awareness of African Swine Fever. The Authority promoted key information on simple biosecurity and animal husbandry measures to stop the virus from spreading from the declared ‘disease areas’ in country’s upper highlands to the rest of Papua New Guinea.

After implementing practices that were critical to controlling the spread of the pig killing disease beyond disease-declared areas, Grace has now championed the cause of raising awareness on African Swine Fever.

“After some time, I realized that the spread of African Swine Fever was increasing in my community. I felt obliged to share the knowledge I gained from National Agriculture Quarantine and Inspection Authority. When a woman in my community passed away, there was a gathering at Ples Singsing [common meeting venue at highland villages]. I took that opportunity to go there and talk to my big brother to conduct awareness about African Swine Fever,” Grace said.

She encourages everyone raising pigs, both at household or commercial levels, to implement good husbandry practices and stresses that pig deaths are caused by African Swine Fever and not black magic or sanguma.

“My pigs are now fenced with notice to members of my community to refrain from coming close to their enclosure. It is my hope that this deadly virus is completely eliminated from my village,” Grace added.