Stories from the Vault: Solar Brings Energy Security, Cost Savings, and Education to the West Bank 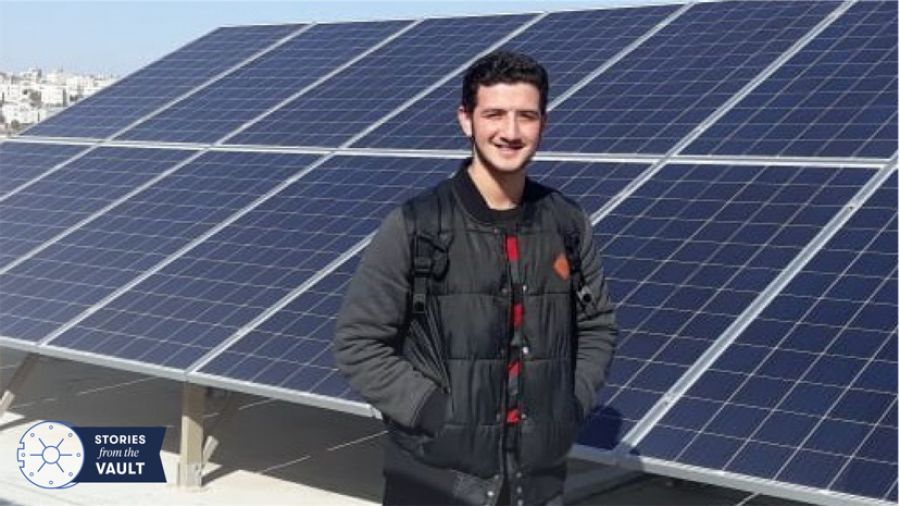 The USAID Palestinian Energy Program (PEP), implemented by DT Global, ran from 2016 to 2019 with the goal of strengthening the organizational and technical capacity of the Palestinian energy sector in order to support affordable and sustainable energy independence in the West Bank. Across the West Bank, energy demand continues to grow exponentially due to increasing living standards, high population growth, and rapid industrial expansion. Energy generation, however, has not been able to keep pace, forcing government, businesses, and households to depend on energy imports, which comes at a high price.

Palestine Polytechnic University (PPU), one of the West Banks’s top technical universities, saw its electricity consumption and accompanying electricity bill grow through the years as a result of an increase in its student population and the accompanying level of activity on campus. The strict multi-year university budgets made adapting to increases in basic operating costs particularly challenging.

Through USAID’s PEP, we supported PPU in implementing the “On Campus Solar Array” renewable energy demonstration project. In July 2018, this project, which involved the installation of rooftop solar panels on four buildings at the Hebron campus, was formally launched. By the end of 2018, the system had generated approximately 380 MWh annually and saved PPU over 50 percent of its electricity cost.

The university decided to invest its savings from this into 20 annual scholarships over the next 10 years, for male and female students enrolled in energy programs. PPU hopes this next generation of experts will help to bridge the skills gap in Palestine’s energy sector.

Ali Ghassan studies renewable energy at PPU, thanks to this new scholarship. “I was very lucky to get a scholarship from PPU. It saves my family money that they can spend otherwise. Being able to study renewable energy and actually having a model at the university that I can see and study will open the doors for me and increase my employment opportunities,” he said. “It’s very interesting as it is a mix between mathematics, physics, electrical engineering, and mechanical engineering. I’m happy I made this decision,” he added.

Ali expressed high hopes for the West Bank and its green future. “Focusing on and improving the renewable energy sector in the West Bank will not only provide cheaper and natural sources of energy, it will also improve the Palestinian economy and create additional job opportunities.”

Through this pilot project, PPU increased public awareness of the benefits of renewable energy and provides students with hands on exposure to solar technology. As of December 2018, the results have been promising.

“The installation of the renewable energy system on PPU’s campus has played a great role in increasing awareness of renewable energy. We constantly get [requests for] site visits from other institutions, in addition to [our own] electrical engineering and industrial automation masters and diploma students. Moreover, two municipalities have contacted us to make use of our model to try and copy it,” said Dr. Lu’ay Shahin, a renewable energy lecturer at PPU. He was also confident there will be an increase in future student enrollment in the program given students’ direct exposure to the technology.

Over the course of implementation, USAID’s PEP supported both institutional capacity and renewable energy pilot project work to increase green and independent energy in the West Bank, from creating reports and trainings, to supporting the creation of the Green Energy Finance Committee to its work with PPU.

About the project: The USAID Palestinian Energy Program (PEP), implemented by DT Global, was designed to strengthen the organizational and technical capacity of the Palestinian energy sector to support affordable and sustainable energy independence in the West Bank. The project focused on building the institutional capacity of Palestinian energy institutions, strengthening commercial operations of distribution companies, and implementing select renewable energy pilot activities.