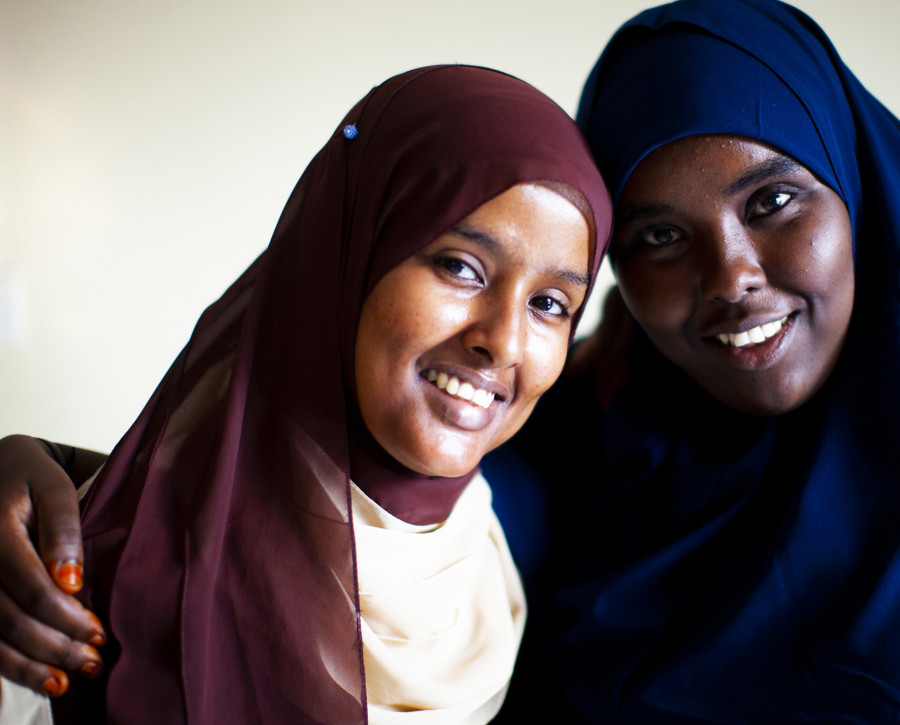 Imagine living in a place where it is difficult for anyone—male or female—to challenge traditions and perceptions about what is appropriate and possible, or to find employment possibilities where there are so few. In such a place, how does a young woman set aside her fears and doubts and summon up the courage to confront these challenges and create her own dream?

Somalia’s human development indicators are among the most problematic in the world. There is a lack of employment due to limited opportunities in the formal sector, barriers such as traditional gender norms, biases against individuals from diverse backgrounds, and the ongoing insecurity and violence in many parts of the country.

Over 70 percent of Somalia’s 14 million citizens are under the age of 30.  Around 40 percent of these young people are seeking employment, and over 60 percent are actively trying to leave Somalia in search of better opportunities. It is estimated that around 850,000 Somalis lived outside of Somalia in 1990; as of 2015, the figure was about two million.

The unemployment rate for Somali youth is one of the highest in the world. It is estimated that approximately 67 percent of young people between 14 to 29 years of age are unemployed. The rate for young women is even worse. At 74 percent, it is nearly impossible for young Somali women to find employment.

Education is not necessarily the key to employment. Even in traditional fields, young, educated women also struggle to find jobs; employment in male dominated fields in the formal sector is even less likely. To combat these challenges, in 2018 the USAID Somalia Transition Initiatives for Stabilization Plus (TIS+) Program, implemented by DT Global, opened up a small space for four young women to step into an unusual work opportunity. USAID’s TIS+ works to increase Somalia’s stability through participatory processes that promote good governance and community cohesion.

Starting in 2016, TIS+ began implementing infrastructure projects in many parts of Somalia.  As part of a sustainability strategy for these facilities, TIS+ also began helping its government counterparts to set up facility oversight committees, consisting of an average of nine individuals from the government, civil society, and the private sector. Oversight committees were formed to ensure that the facility’s operations and maintenance plan was carried out and that the project investment was protected after TIS+ involvement ends. TIS+ started providing capacity building workshops for these committees in 2018 and continues to set up and train committees to this day.

In June 2018, the Mogadishu Field Office hired a skilled female facilitator, Ms. Fatima, to prepare and conduct workshops for seven committees for facilities built in the Banadir Region. Seeking out a female facilitator to lead infrastructure sector workshops is unusual in itself, and the TIS+ staff took this one step further and opened up a small space for young women from diverse backgrounds to enter the infrastructure sphere by creating a Junior Facilitator position for the committee workshops.

With the assistance of Ms. Fatima, TIS+ carried out a transparent selection process and contracted four young women—Hani, Layusa, Muslimo, and Nasteha—as Junior Facilitators. Ms. Fatima provided a Training of Trainers workshop for the young women and then mentored them during the seven committee workshops conducted for TIS+.

When asked how it felt to be unemployed, Muslimo said, “I have never had a full-time position, only a few very short-term contracts. To be honest, it’s very disappointing. I had to keep telling myself that I was not to blame. I have worked so hard! I have two degrees, and I just have to be patient. But it’s so hard to remain hopeful.”

Layusa, who had been unemployed for about six years before her short-term contract with TIS+, added, “It’s a very hurtful time. My parents paid for my education. They made real sacrifices to allow me to attend university. I’ve felt such pressure and obligation to return the gift they gave me by finding good employment. Recently, they have started to ask me why I’m unable to find work after so long in education. This is a really difficult question for me to answer.”

Hani has had a similar experience, “My parents are always asking me when I will find a job. They have started to think that marriage would have been a better option for me. I know that there have been times that they have regretted spending all that money on my education.”

When asked about her access to education, Layusa said, “All of us here were fortunate enough to grow up in Mogadishu with families that supported us to get an education. But the girls in my home village are traditionally not allowed to be educated—we just do household chores. My village is under Al Shabaab rule; I know that had I still been there, I would have been married by the time I was 13, rarely allowed even to leave the house. That would be my life.”

Hani added, “I also grew up in Mogadishu, but I come from a village of nomadic people where the girls had more choice. We had more freedom to marry whom and when we wanted, and we could move around more freely. But access to education for girls was still difficult.”

Despite the difficult odds, Hani, Layusa, Muslimo, and Nasteha dedicated themselves to combatting the challenges Somalia faces. During their TIS+ work, the women began to discuss how they might start a business. Within a few months, they had created their company, Hanaan-kaab Academy (Systems Support Academy), with the goal of becoming the first women-owned and managed academy dedicated to building the capacity of women across Somalia. As part of this, their goals were to engage actively with the government, have their voices heard, and be part of the discussions to find solutions to address the devastating unemployment rates in Somalia.

Layusa recalled the moment they realized that they might be able to build on their TIS+ experience: “This was the first time we realized that there are hardly any female trainers in Somalia—that there is a gap in the market. We envisioned developing a network to help girls get better access to training.”

Muslimo said, “It gave us hope to be able to do something for this society, to show people that girls are very important to the future of Somalia.”

Hani said, “Seeing these other young women, who were just as educated as me, who were also unemployed and trying to find some future for themselves, gave me a sense that I’m not alone. It gave me reassurance and hope.”

Muslimo added, “This training from TIS+ gave us the opportunity to come together as a group of girls and realize there is a chance for us to start our own business—it’s not just for boys.” 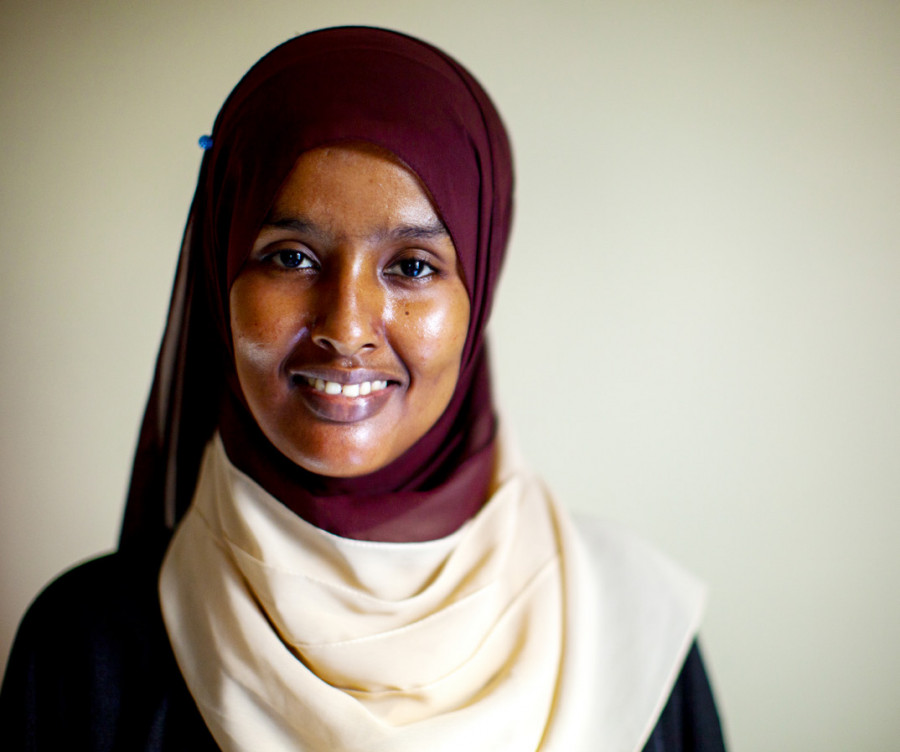 When asked about their vision for the future, the young women were very clear. Muslimo said, “This is a very new idea, but we need to show the unity girls can achieve and show how we can help benefit Somalia.” Layusa continued, and noted, “We see a future with women as leaders in Somalia. In order for that to happen, women need access to education and training.”

Hani emphasized the need for role models, “We want to be role models for the next graduates, for them to see what is possible and to inspire a greater future for themselves.”

She added, “Good governance is the key: [the government] must listen to girls in order to better support opportunities. When this happens, girls can be a part of the process—which is so important.”

About the project: The USAID TIS+ program aims to increase Somalia’s stability through participatory processes that promote good governance and community cohesion. The project maintains a continued focus on quick impact stabilization activities at the district and community levels, with a focus on targeted areas in the newly emerging states. At the same time, TIS+ supports Somalia’s goal of moving from crisis response and stabilization to medium and longer-term development by facilitating joint planning between community, government, and private sector actors on shared goals.