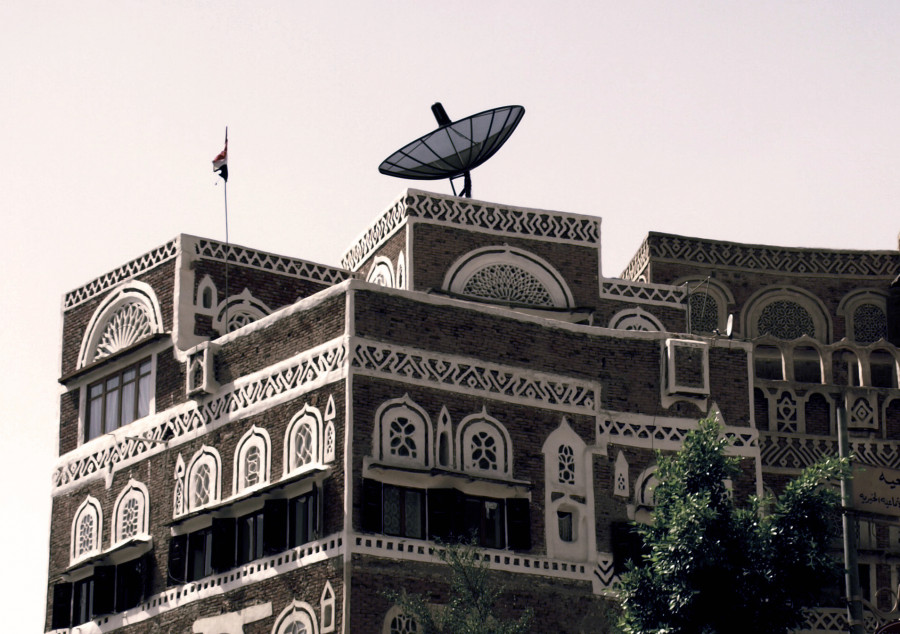 Recent years have witnessed an uptick in the number of partisan websites, television channels, and social media pages covering Yemen’s conflict. The Houthis in particular appear to prioritize media investments as a way to promote their ideology and counter opposing messages. As Hannah Porter argues, a number of research activities conducted in the past two years may indicate that these investments have paid off, with many Yemenis living in Houthi-controlled territory expressing confidence in the group’s media outlets and spokesmen.

For the Houthis and their allies, warfare does not always require taking up arms. In fact, the group considers propaganda to be one of the most effective means of countering enemies, and one of the most dangerous weapons that their adversaries deploy against them. For years, Houthi-affiliated outlets have highlighted the important role of media in modern warfare and contemplated how best to shield Yemenis from enemy propaganda.

To maintain a competitive edge in public messaging and media narratives – the Soft War, as they often call it – the Houthis invest in a variety of news outlets and artistic productions, some of which promote disinformation about their adversaries and the ongoing conflict. Documentaries, articles, social media posts, and cartoons released on pro-Houthi platforms over the past seven years highlight their preoccupation with guiding media narratives in territories under their control.

Since early 2020, DT Global’s partners have conducted research across Yemen to better understand the relationship between Yemenis and their local media environment. Qualitative and quantitative research activities including broad surveys, key informant interviews, and focus group discussions have sought to answer questions about Yemenis’ access to news and information, as well as the platforms and outlets that they trust the most. One of the key findings from this research is that the views of Yemenis living in Northern governorates (i.e., the areas under Houthi control) tend to align with Houthi narratives – a possible indication that their media practices are effective in shaping public opinion.

Long before the Houthis became a topic of regional or international news coverage, the group was working to promote their messages and attract followers. During the Saada Wars (2004–10) between the Houthis and Yemen’s government, pro-Houthi social media accounts and websites were created to influence the popular narrative about the conflict. Houthi media capabilities increased dramatically since their takeover of Sana’a in 2014–15. The group now boasts dozens of news sites, television channels, radio stations, and countless social media pages that tout Houthi narratives about national politics and international affairs.

Despite their impressive media apparatus, the Houthis still face a few challenges when countering outside narratives. Even though the group has gone to great lengths to silence critics – including shutting down or seizing local news outlets and arbitrarily detaining journalists – the Houthis have limited control over some platforms, such as foreign satellite news channels, social media, and messaging apps. This means that the Houthis need to rely on more than censorship to control narratives on domestic and international events.

Houthi media productions are characterized by diverse, entertaining, and persuasive content. One of their primary news channels, Al-Masirah, includes women’s programming, children’s shows, and documentaries, while radio shows air short dramas and ‘operettas’. Poetry features heavily in most Houthi media platforms, as zawamel (sometimes referred to as war poems) are often adapted into music videos. Perhaps the strategy is to provide audiences in Northern Yemen such a wide range of content that they need not look beyond Houthi media.

Is their approach working?

There is some indication that the Houthi approach to messaging and propaganda has proven effective. Research conducted by DT Global’s partners in the past two years shows that Yemenis living in the North have a high degree of trust in Houthi news outlets and are more likely than their Southern counterparts to view statements by Houthi officials as reliable, even when these statements are demonstrably false.

In a 700-person survey conducted in July 2021, 83 percent of respondents in the Southern governorates of Abyan, Aden, and Hadhramout said that Al-Masirah is one of the Yemeni news channels most likely to spread fake news. However, in the Houthi-controlled areas of Sana’a (Amanat al-Asimah and the governorate) and al-Hodeidah, only 17 percent of respondents felt this way. In other words, the large majority of respondents in Houthi-held areas reported that Al-Masirah is not likely to publish fake news.

In a survey in August 2020, only 26 percent of respondents living in government-held areas reported that information provided by local officials is reliable, whereas a whopping 79 percent of people living in Houthi-held territory (for this survey, al-Hodeidah and Ibb) reported that they trusted local officials. Respondents in this survey were also asked if they believed that local news coverage of COVID-19 was reliable. Despite the fact that Houthi authorities and media outlets misled the public about the coronavirus (especially during this period), 84 percent of participants in Houthi-held territories believed that this information was reliable, whereas only 43 percent of respondents in the South felt the same.

Certainly an argument could be made that respondents living under Houthi rule may feel obliged to report positive sentiments toward local officials and their affiliated outlets, but multiple rounds of surveys, key informant interviews, and focus group discussions in three Houthi-held governorates have produced the same findings: respondents living in these areas are more likely than their Southern or Eastern compatriots to align their views with Houthi media narratives.

For example, one round of focus group discussions asked participants to evaluate a news story and determine whether it was factual. The news story in question was a July 2020 report aired on Houthi outlets claiming that missiles bearing the USAID logo and sold to Saudi Arabia by the agency had been uncovered in al-Baydha, thereby proving that Western development organizations are a front for military intervention. The story was clearly fake: not only because USAID is not responsible for weapons sales but also because the logo pasted onto the missiles has not been used by the agency in more than 30 years. This news story was believed almost universally by participants in Houthi-held territory – who cited the persuasive video footage and the official nature of the news report – and disbelieved by almost all participants elsewhere.

How to tackle disinformation in Yemen

Like many political parties in Yemen and worldwide, the Houthis have used media as a tool to promote their own interests and influence public opinion. Their mixed approach has included investments in partisan media and the suppression of independent journalism. Their control over local media has had, and will continue to have, an impact on Yemenis’ access to information and their perspectives on current events.

Organizations and governments hoping to reverse this trend should work to support independent journalists in Yemen. This support may be come in the form of grants, but it could also include media trainings and conferences. Journalists from marginalized groups and regions should be given special consideration, as they may have perspectives and insights that have so far gone unreported.

Donor-funded media projects will have a limited impact and audience if they exclusively target Houthi disinformation, as these projects will be quickly dismissed as pro-Western or pro-Saudi propaganda. Instead, media organizations should identify and counter disinformation and harmful messaging wherever it exists – whether it comes from Houthi media outlets or those affiliated with the internationally recognized government, al-Islah, the Southern Transitional Council, or others.

More support should be provided by donors to ensure that diverse and reliable news sources are available to all Yemenis. This means addressing the lack of electricity in some areas, as well as the unavailability of internet services, which is sometimes due to the prohibitively high cost of internet packages. In a survey conducted in 2020, 86 percent of Yemenis reported that a lack of electricity impacted their ability to access news, and 89 percent said that a lack of internet had the same effect.

The international community and especially human rights organizations need to call out all parties to the conflict that commit abuses against journalists such as threats, arbitrary detentions, wrongful convictions, death sentences, and assassinations. These acts severely impede the ability of Yemen’s skilled and committed journalists from doing their jobs and providing the public with critical information about their communities and the conflict.

This piece was originally published on the Yemen Policy Center and republished here with permission.