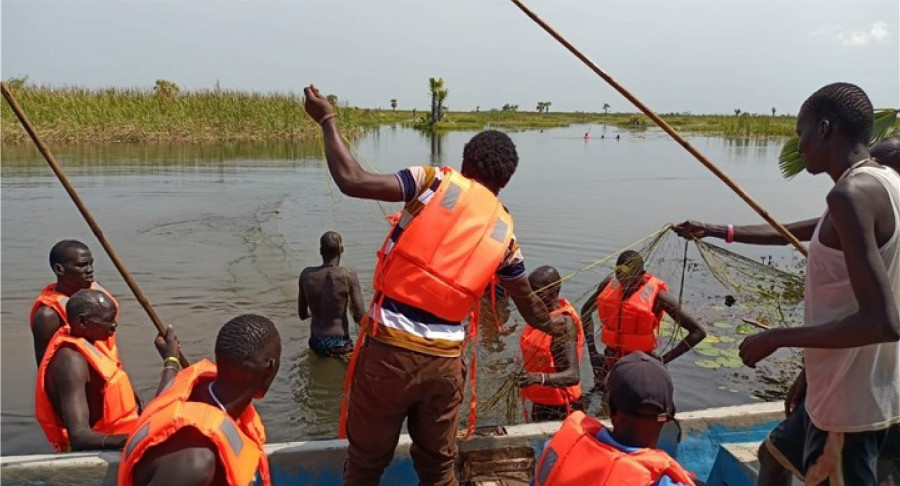 Climate change is an acknowledged crisis worldwide. The impact of climate change is undeniable: people in fragile and conflict states are experiencing droughts and floods, heightened temperatures, and displacement as a result of rising temperatures. Addressing climate change impacts must be a collective effort from international peacebuilding actors. Now is the time to focus on prevention strategies that strengthen the ability of local communities to respond to climate change impacts and builds their resilience. USAID Shejeh Salam, a civic engagement and peacebuilding program implemented by DT Global, is supporting strategies to build climate resilience in the communities it serves.

In South Sudan along the border of Lakes and Unity States, the ethnic Nuer and Dinka communities have been involved in decades-long cross-border disputes driven by competition over grazing fields and water sources for their livestock. This conflict was then aggravated by the seven-year civil war that saw the two communities torn apart. Additionally, persistent flooding caused by climate change has displaced thousands of Panyijiar Nuer (Unity State) community members into the Lakes State, destroyed their crops, and killed livestock from increased waterborne diseases. With the main source of income lost to these impacts of climate change, the youth from the most affected areas have resorted to cattle raiding, igniting more violence in an already fragile state of peace and security in the region.

Since the 2013 ethnic violence, the Bor community of the greater Jonglei region has migrated to the Greater Equatoria region, bringing along their cattle herds. Meanwhile, the Equatoria communities are predominantly agriculturalist and depend on their crops for their livelihoods. The presence of the Bor peoples has since sparked tensions with the host communities as cattle damages crops, forests, and water points. Now the Jonglei region has been extremely affected by flooding, pushing another influx of Bor people and their cattle into various regions of Equatoria and fueling conflicts.

Similar flood-related displacements have occurred in both Leer and Mayendit Counties. The remaining dry land suitable for cattle grazing and human settlement has been a significant source of disputes between the two communities for the last two years. As recently as February 2022, the youth of both Leer and Mayendit Counties were engaged in a series of resource-driven reprisal attacks as they struggle to cope with the shocks of the ongoing climate crisis.

Elsewhere in the northern part of Unity State, in Rubkona, Mayom, and Guit Counties, thousands of people have fled to a UN-run Internally Displaced Persons camp, north along the border of Sudan, or to the neighboring Ruweng Administrative Area. The movement towards the Sudan border has led to conflict between the displaced South Sudanese pastoralists and Sudanese nomadic pastoralists who fear competition over grazing fields. Serious violent confrontations have also occurred between Guit County youth and Ruweng youth as they compete for the remaining dry land for settlement and livestock grazing.

USAID’s Shejeh Salam project, implemented by DT Global, is engaging youth populations to expand their income generating activities and stave off the effects that climate change and climate change-driven migration and displacement has had on livelihoods. Shejeh Salam aims to mitigate conflict and discourage youth from acquiring wealth violently.

For example, Shejeh Salam has engaged 100 youth in fishery activities in Unity State’s Panyijiar County. This activity saw the youth trained in improved fishing techniques and fish preservation methods. It also supplied youth with various types of fishing gear and protective equipment. Recent evaluation results of this activity indicate greater economic stability for these youth and their families, as they sell their fish for profit. Shejah Salam is currently mobilizing an activity in the neighboring Mayendit and Leer Counties for 200 more youth to receive similar support.

The Shejeh Salam project is also engaging 150 youth in Panyijiar County in a cash-for-work activity to rehabilitate a community dike that was destroyed by a flood. As part of this activity, the youth are also able to socialize and build lasting community connections. The dike restoration will also safeguard the local market from flooding, protecting business opportunities, and boosting the local economy after significant suffering from the flood.

While these types of interventions are crucial, we also need to consider resilient response, climate change sensitization, and migration as an adaptation strategy in our programming. For instance, DT Global should work to engage local organizations and communities in pre-migration peace dialogues between settler and host communities so they can co-exist while respecting each community’s way of life. For programs in conflict states, implementing partners and donors should implement activities that build resilience to climate impacts and aim to reduce the climate shocks that aggravate inter-communal conflict.