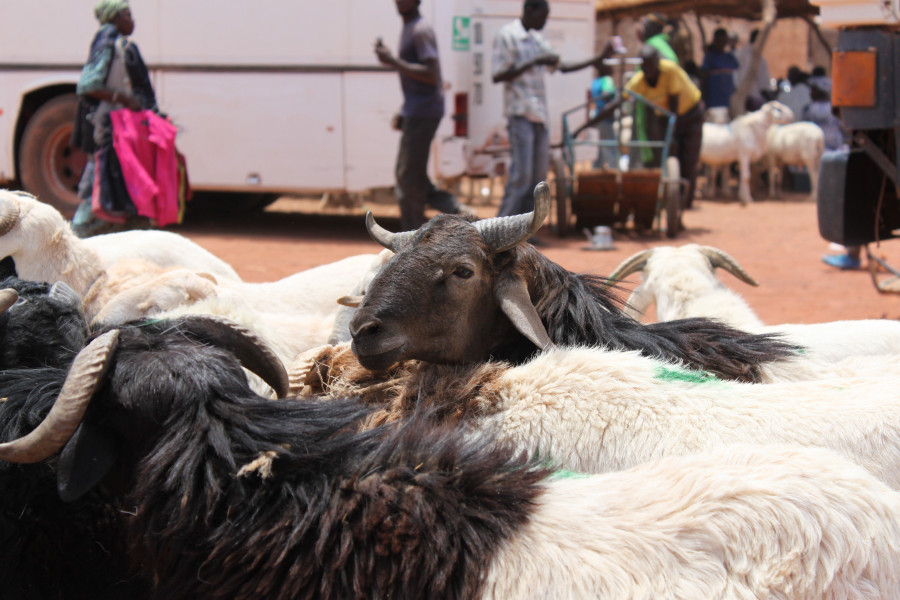 The rural village of Sassadi sits in Bandiagara Cercle, Mopti Region — a traditional cross-roads of the Sahel. Dominated by the sandstone Bandiagara Escarpment and home to the Dogon people, Bandiagara is characterized by a stony landscape and erratic rainfall, making agricultural work difficult. Here, Yissa Djiguiba, a livestock owner and mother of eight, is the President of the Toumo Ibe Toumo Producer Organization and raises and sells sheep and goats in domestic markets in Mali.

Goat and sheep fattening in Mali is predominantly done by women, rather than men. Unlike beef cattle, typically raised by men, goat and sheep can be fed and watered close to the homestead, where women tend to stay for socio-cultural reasons. In addition, these smaller livestock do not need to graze over large areas, and do not require the same levels of water and forage as cattle.

For many years, Yissa used traditional methods to fatten her sheep. She would purchase a sheep for about 25,000 CFAF ($42 US), put it out to a pasture near her home for about a year,  and then sell it for around 40,000 CFAF ($67 US). Yissa made most of her sheep sales during the Tabaski Islamic Feast, when Muslim families buy and consume sheep. Although sheep are in high demand during the Tabaski Feast days, Yissa found that the amount of time it took to fatten and sell her sheep, combined with the funds needed to pay the village herdsboy who tended her sheep, resulted in a small net profit. The low profits earned by Yissa meant that her family’s socio-economic status did not change much from year-to-year and she found it difficult to afford to pay the school fees for all her children.

USAID’s Livestock for Growth program (L4G), implemented by DT Global, introduced modern animal fattening methods to livestock owners in Mali, like Yissa. Building off work done by the International Livestock Research Institution (ILRI), L4G’s modern animal fattening methods and techniques have enabled livestock owners to fatten their sheep and goats more quickly — within 3 to 4 months — than they could using the traditional open-field grazing techniques which take up to 12 months. Indeed, by intensifying animal fattening and enabling women to fatten their sheep and goats right in their family homesteads, women can now fatten and sell sheep or goats three or four times a year, not just at the Tabaski Feast, thereby tripling their income over the traditional fattening methods.

The DT Global team in Mali rolled out a unique “Livestock as a Business” (LAAB) approach to train women, men, and youth livestock producers. This approach provides basic numeracy, literacy, and business training for livestock producers and transforms the way they think about livestock herding — from thinking of herding as a way of life to thinking of herding and production as a business and a way to create an improved socio-economic livelihood for one’s entire family. This LAAB approach is particularly empowering for Malian female livestock owners, who are more vulnerable to climactic shocks and economic variability and tend to lack access to land, assets, credit, and markets, especially when compared to men.

Yissa participated in all L4G’s training and adopted the new animal fattening techniques she learned from our staff. In 2016, she fattened two sheep at a time over a six-month production cycle, as opposed to the traditional 12-month production cycle. Following the LAAB approach, she began considering sheep as an investment: buying larger sheep for a greater sum and spending more on fattening each sheep. Subsequently, Yissa sold her sheep for 75,000 CFCA ($126 US), making a net profit of about 20,000 CFCA ($34 US) per head. By the end of 2016, Yissa raised four sheep and earned 80,000 CFCA ($135 US), which she used for her children’s school fees.

Throughout 2017 and 2018, Yissa reinvested her profits and was able to double her production, decreasing her fattening time from six months to four months and increasing her profits year on year. In 2019, Yissa is repeating the technique from 2018 and fattening her sheep in a four-month production cycle. “With this stable and high source of income, I can pay my children’s school fees and for their health-care and I still have money left over to buy more food for our household,” Yissa states.

Since its start in October 2014, the L4G program has trained more than 20,800 women in a range of topics which have helped them build their livestock businesses, improve animal health care practices, and by adopt modern animal fattening practices. As Yissa told us, “Thanks to L4G, all our lives are getting better all the time and we can now educate our children.”

About the program: Livestock for Growth (L4G) is a five-year program funded by USAID/Mali and implemented by DT Global which supports and strengthens the competitiveness of the livestock value chain in the Mopti and Timbuktu regions of Mali.