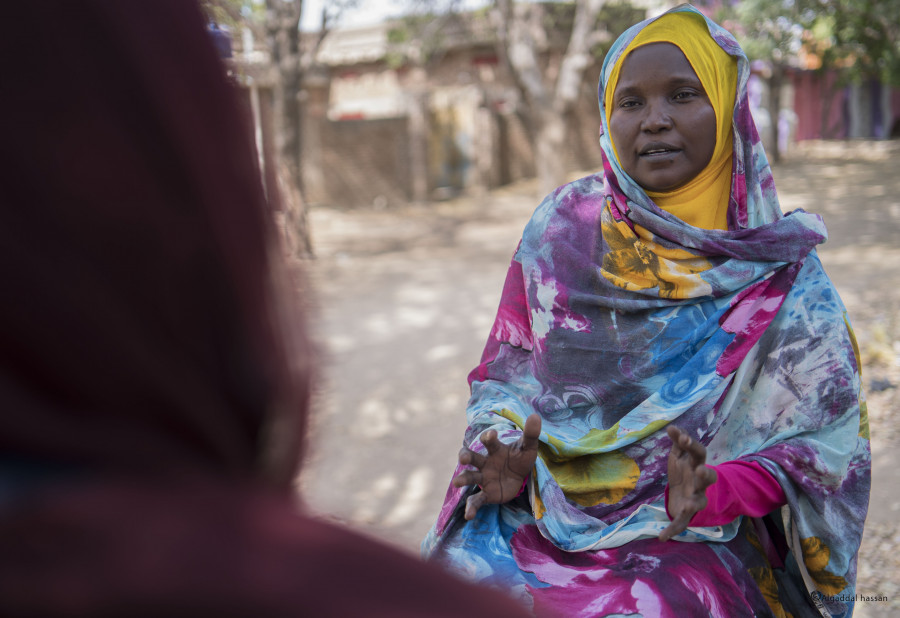 Wrapped in her colorful Sudanese tobe and displaying a calm demeanor, Amna Mamoun carries a dark secret in a pink plastic bag by her side. With her calm voice and kind eyes, you would never imagine that she was trained to kill.

“I was just an ordinary school child living a normal life and I was smart too. When the war started my life changed drastically. My siblings and I were pushed to join the armed group and my family was proud that they had children fighting for freedom,” Amna says. “It didn’t matter that we were children. It was 1997 and I myself was only 13 years old.”

“I joined the Sudan Peoples Liberation Movement and received combat and first aid training in Ethiopia. After six months I graduated and immediately joined the the military operations. When I wasn’t fighting, I was helping treat the wounded. At the time I was proud and felt grown up and at age 25-years-old I was promoted to be a Lietenant Colonel,” Amna looks away takes a deep breath and says, “Little did I know what this would really mean for me in the future.”

In early September 2011, less than three months after war broke out between the government of Sudan and the Sudan People’s Liberation Movement/Army-North in Southern Kordofan, violence erupted once again in Blue Nile State. It began in the capital Damazin, and spread quickly throughout the state, drawing on similar grievances and tensions that had driven the previous civil war and that had been left unresolved by the Comprehensive Peace Agreement.

Sitting under a tree in front of the Women’s Awareness Initiative, Amna is an active member in the community where she speaks with other women, encourages peace, and highlights security issues related to women especially. At the same time, she is playing an invaluable role in community reconciliation and peace building. “I am still hurting from what I lost during the war but I am working t o ensure the cycle of violence is broken and that my children and my community grow up in peace.”

“During the conflict, I saw things that no child should see. I experienced emotions that were beyond my ability to comprehend,” Amna says.

USAID’s Towards Enduring Peace in Sudan Activity (TEPS), implemented by DT Global, is supporting community-based efforts to promote peaceful coexistence between communities and across borders within Sudan and its neighbors. With a series of workshops, discussion groups, and activities it is equipping  Sudanese women groups at state and local levels with skills and techniques to mitigate and resolve conflicts, prevent youth mobilization to violence, and support social and economic integration of war-affected areas. Since 2015, TEPS has supported over 33,000 women in peace building, conflict resolution, reconciliation, and consensus building efforts.

“I’m almost 40 years old today, I have seen so much violence and I wouldn’t want my four boys to go through the same experience. Their father is still fighting on the other side but he contacts us from time to time. We know he is still alive,” Amna says.

“I’m an advocate for human rights, child rights, and women’s issues. I never miss these workshops and discussions. I want peace for Blue Nile and for Sudan as a whole.”

“During the war many bad things happened; we lost loved ones, our livelihoods, and hope. But now there are also good things that happen here. We need to tell our stories, because that resilience, that spirit, that strength, that courage to survive, to continue living, doesn't come from empty space. It comes from our culture and the families we grew up in before the war disrupted our lives.”

Amna very delicately leans over to pick up the pink plastic bag and quickly glances at her gun. “Yes, I always carry it but it’s unloaded and useless and is only a reminder to me that I will never use it again.”

The population which was perhaps the most severely affected by the war was Sudanese women. Sudanese women were disproportionately impacted by the conflict, which took a negative toll on a myriad of factors, including their health, safety, and economic opportunities. Despite how severely they were affected, women had a large role in the reconciliation between communities and the overall peacebuilding in the country.

USAID through TEPS will continue to back civil society efforts to engage the state, connect with marginalized communities and groups, and advocate for democratic reform. It will support the peace process, agreements, transitional justice, institutional reform, constitutional development, and elections as needed. A successful transition will represent a shift in gender, generational, and ideological norms across Sudan. It will empower women and historically marginalized people, and promote diversity.