Q&A with Lovisa Arlid: How DT Global is Mainstreaming Gender into Energy Projects 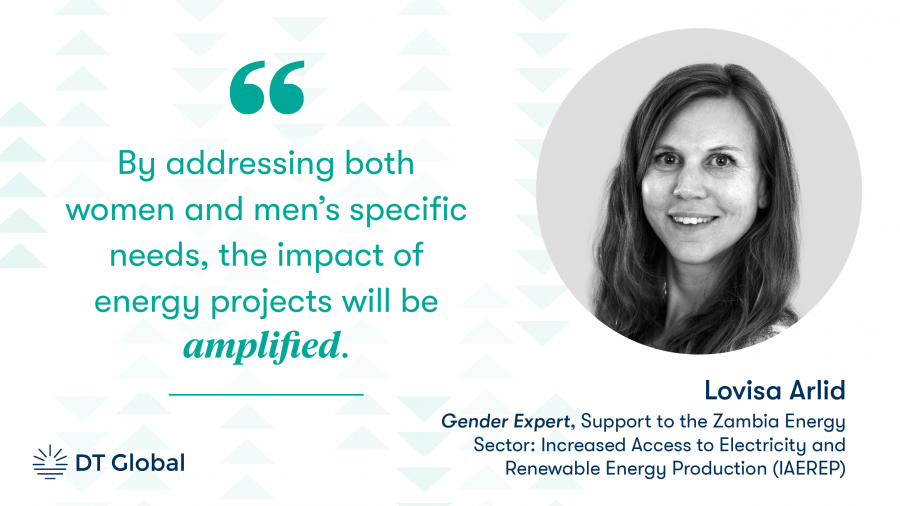 In this interview, we sat down with Lovisa Arlid, Gender Expert for the EC-funded Support to the Zambia Energy Sector: Increased Access to Electricity and Renewable Energy Production (IAEREP) project , implemented by DT Global, to get her insights into gender mainstreaming in the energy sector. The IAEREP project supports the Government of Zambia in increasing access to clean, reliable, and affordable energy while also contributing towards the production of renewable energy. The project is mainstreaming gender in policies, strategies, and regulations for the Zambian energy sector, and is preparing the first Gender Strategy and Action Plan for the sector.

What is the expected impact of mainstreaming gender in policies, strategies, and regulations in the energy sector in Zambia?

Gender mainstreaming is an approach where women’s and men’s specific needs and interests are considered in any planned intervention, including policy. It is both a process as well as the global strategy to achieve gender equality, which is the goal of gender mainstreaming. I am currently working with the experts responsible for development of the energy efficiency (EE) and renewable energy (RE) strategies in Zambia to ensure that gender considerations are mainstreamed. The RE and EE strategies will be gender-responsive by ensuring that they promote technologies that address the specific needs of both men and women. For example, clean energy for cooking is an important gender-specific need of women who are typically responsible for firewood collection and cooking.

How does the Gender Strategy and Action Plan impact the energy sector?

If the energy sector should contribute to enhanced socio-economic development, which is the goal of our work, gender mainstreaming is key. The Gender Strategy and Action Plan will help institutions to systematically mainstream gender in all areas, ranging from procurement (the starting point for all projects), planning and budgeting, and gaining access to and control of clean energy. By addressing both women and men’s specific needs, the impact of energy projects will be amplified.

Why incorporate both gender mainstreaming and a Gender Strategy and Action Plan?

We are utilizing a dual approach towards realizing gender equality. This approach involves mainstreaming gender perspectives in the policy framework while also implementing specific measures to contribute to advancing gender equality. While gender mainstreaming in various key energy policies and strategies is important, it is also essential to have a specific gender strategy and action plan for the energy sector which include specific actions to be monitored and reported on. For us, this is not an abstract concept—the project team continues to conduct formal and informal training initiatives for the stakeholders. 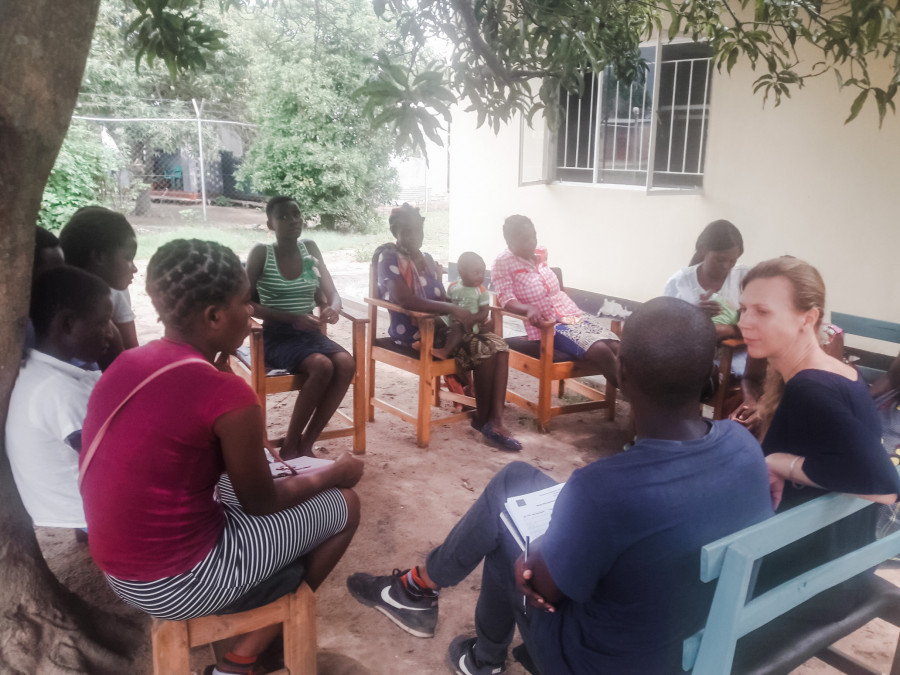 How have the stakeholders responded to the idea of gender mainstreaming?

Is gender mainstreaming going to bring about sustainability in the energy sector in Zambia?

Gender mainstreaming will contribute to sustainability in the energy sector in combination with other cross-cutting issues, especially environmental protection and climate change. Gender mainstreaming can help to increase the uptake of energy services among different customer groups. This policy instrument itself will be more sustainable, too, because the corresponding gender indicators were included in the Energy Sector Mentoring and Evaluation Plan developed by the Ministry of Energy with the IAEREP support.

What are some of the project’s gender mainstreaming success stories and best practices?

Although the Gender Strategy and Action Plan is not yet completed, with the time we’ve spent engaging with stakeholders on it and developing it, I believe it is going to be successful. We started in 2018 with a gender assessment of the energy sector, followed by extensive data collection, training in gender mainstreaming, and continuous stakeholder engagement. We also have a dedicated gender and technical working group with representatives from the public, private, and NGO sectors to get different perspectives and inputs. This has allowed us to really go into depth and fully understand the gender gaps that must be addressed in the energy sector in Zambia.

Based on the series of five gender mainstreaming workshops conducted in September and October 2020 during which we trained 130 energy stakeholders, we discovered that to build a business case of gender mainstreaming we must show the existing gender gaps and discuss potential implications and repercussions. For example, by presenting sex-disaggregated data on men’s and women’s access to electricity, willingness to pay, participation in decision-making on purchases of electric appliances, awareness of suppliers of clean energy technology, and access to credit, we could clearly show that women tend to be disadvantaged in all these areas, which inhibits adoption of RE and EE technologies. That information allows us to better make the case that these barriers must be addressed to increase uptake of electricity, RE, and EE technologies, ultimately ensuring that more Zambians—both men and women—have access to better clean energy options in the future.